Tattoos should be allowed in workplaces

I believe that tattoos in corporate America should be permitted, as long as they are appropriate to show in a workplace. Tattoos are a form of art and, for some people, they are symbols of their life journey. By banning this form of art, you are forcing someone to hide a part of them, implying that all tattoos are scandalous.

Even though this is not the case. I personally think that tattoos don’t define what you have to bring to the table, nor should they dictate your professionalism in a workplace. However, if the tattoo resembled something that was truly inappropriate, such as a symbol discriminating against a group, person or thing, I could understand. Although, anything else should be allowed.

Generally, companies that ban tattoos in the workplace should read the U.S. Constitution. The constitution protects the form of expression that tattoo’s resemble. In an article against tattoos in the workplace, the author said that “most companies are of the belief that allowing staff to showcase their tattoos will result in declining sales.” I disagree with this quote, and don’t believe that a person’s tattoos should “intimidate” anyone from working along with the person. 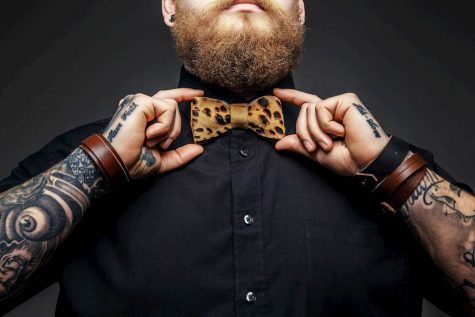 Should tattoos be allowed in Corporate America? This picture represents the average American applying for a job with tattoos. Credit: http://insightsforprofessionals.com/

There are people in America that embrace their tattoos, and will still over-qualify for the job. What matters more? The drawings on someone’s body or their performance? Allowing this rule to be established is limiting citizens of accomplishing tasks and allowing them to be judged by the ink on their skin. This is not fair.

“Most consumers claimed that they would change their business deals, once they discover that staff is being discriminated for having tattoos,” which justifies my reasoning that tattoos should be permitted in every workplace, even big corporations. Although, some corporations are feeling as though they need to re-think this policy. Tattoos are a form of expression and art; it is protected by the First Amendment in the U.S Constitution.