Do Dogs Have Emotions? 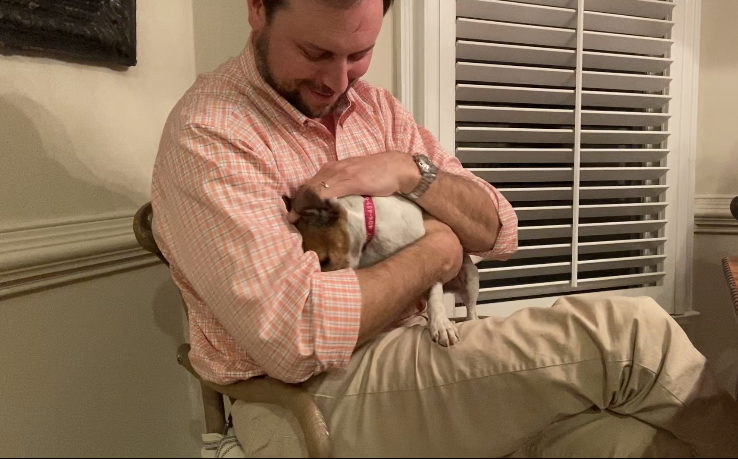 The same dog that was howling at the opening of the door now plays with her owner, showing a wide and fluctuating range of emotions. Photo cred: Claire Mulkey

On New Year’s Day, a small Jack Russell terrier mix with a history of abuse and neglect ran away. Her owner’s family had been shooting at targets, and when one of the louder guns was shot, she bolted down the gravel driveway, with cheetah-like speed. Despite her owners’ long and extensive efforts to relocate her, the dog was nowhere to be found and presumed dead.

Her owners wondered if she had lost her way, or if she had been frightened so much that she did not want to come back. They worried about her throughout the day. In the morning, they wondered if she had any food. At night, they pictured her huddled in the cold darkness, wishing she was in her warm, safe home. They asked themselves if she was scared, if she was sad, lonely, curious, remorseful, etc. They argued about dogs’ feelings, wondering if they really have emotions and thoughts.

Scientists have long debated whether or not dogs are capable of experiencing emotions. Most dog owners believe that their dogs have feelings, but scientists are skeptical about how wide that range of emotion actually is.

Modern Dog, a pet-centered magazine, explores which emotions dogs really have, and which ones their owners create in their love-blinded minds. A recent study has shown that in the department of feelings, dogs are equivalent to two-year old children. They are able to develop joy, fear, anger, disgust, and love, but they can’t experience guilt, pride, and hatred. These are feelings that two-year olds will experience as they mature, but that dogs will never develop.

This may seem doubtful to some, because they believe they’ve seen shameful dogs or prideful dogs. However, these displays of “shame” and “pride” are often just tied to basic emotions, which the human owners then attribute to complex emotions.
“Dogs most definitely have feelings. I can always tell when my dog is wagging her tail and jumping on me that she’s excited.” Sophomore Bailey Oetinger.

The typical “shamed” behavior of a dog means that it is simply scared, and knows that after doing certain things, the owner will admonish it. Knowing these punishments are looming, the dog cowers or shows some other show of “shame,” which is really just fear, study shows. The same goes for “pride.” Often, the dog is simply aware that whatever they just did will bring treats or belly scratches, so they act in a manner that is expressive of love or joy.

Sophomore Phoebe Rathbun says that, “Usually when you get home from a long vacation your dog is excited to see you.” This is an example of the love and affection dogs are able to feel and express.

An Emory University neuroscientist conducted a study  to “map their brains as they responded to different stimuli” (“Dogs have feelings-here’s how we know). He found that they were able to experience emotion and though these emotions were sometimes tied to food or praise, they were emotions all the same. The neuroscientist, Gregory Burns, said that he has “greater appreciation for the richness of the interior lives of animals and a realization that they have feelings very much like we do…”

After five long days, the family found their dog. She was six and a half miles away from her home, having traveled that distance on her own, with little to no food or water. They were ecstatic to have their pet back, and could say that without a doubt she was glad to have them back, too.