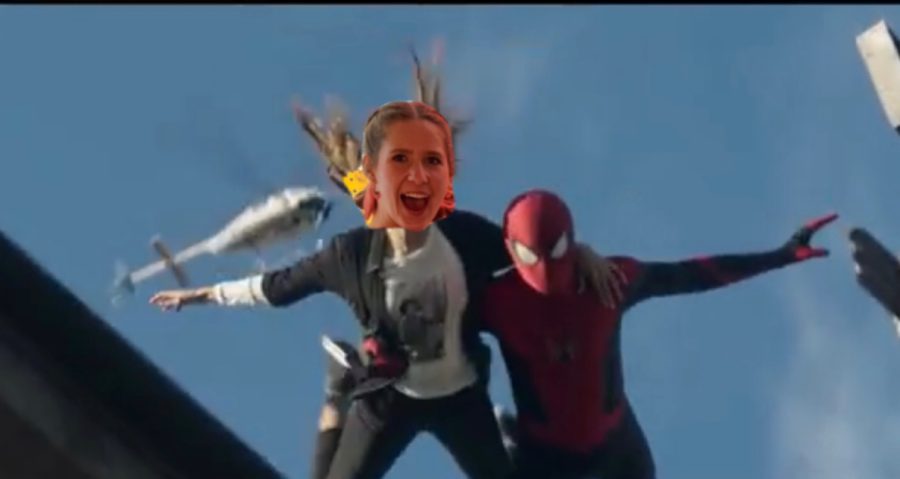 Senior Veronica Soroka saw her life flash before her eyes as Dr. Conners (The Lizard) flung her off of the water tower. She will be forever grateful for Spiderman's quick thinking and agility that saved her life. Photo Credit: Sony Pictures

Some say that alternate realities are just a myth, something that merely exists in sci-fi movies and comic books. Throw out everything you think you know about our universe because there have been not one, not two, but three sightings of a young man, who goes by the name Peter Parker. He is said to be the anonymous face behind the spider suit who miraculously defeated Mysterio, Doctor Octopus, Doctor Connors aka Lizard, The Green Goblin, Thanos, and many other villains.

Roswell’s first eyewitness is senior Torrin Donaldson. Donaldson reported to The Sting, “I was innocently performing a chemistry lab when I spotted out of the corner of my safety goggles a flash of red and blue coming from the supply closet. I turned quickly to see what it was, and by the time I turned back around there was a sticky, web-like goo on my beaker.” Without fully comprehending what just occurred, Donaldson turned to her lab partner to question if they had seen the same thing. Just like that, the news spread just as fast as the figure disappeared.

The second sighting was spotted by sophomore track star Taryn Peebles. Peebles was practicing the 100 yard dash when she spotted yet another red and blue figure flying over all 20 hurdles at once. She told The Sting that she attempted to record a video of the figure, but it was too quick to capture on video. She immediately reported to The Sting, “I was minding my business practicing for the upcoming meet this weekend when a rush of wind blew me to the ground. I whipped my head around to identify the source but all I could spot were a pair of big white eyes.”

The last sighting was the most exciting of them all: Spider-Man and Dr. Conners faced off in an epic battle where Spider-Man tried to stop the Lizard from taking control over Roswell High. A giant green lizard- also known as Dr. Connors- slithered out of the boys’ H hall bathroom. The Lizard made his way to all of the biology classrooms to revive all of the dead frogs that were being used for dissection in order to expand his army of reptiles and amphibians. His magic serum allowed the DNA in the frogs to revamp with immediate contact with another cold blooded creature. Once the procedure was underway, the frogs began to turn into lizards with the sole purpose to morph students of Roswell into a lizard army. Students one by one began to transform into scaly, disgusting, vile, and repulsive creatures who sought to destroy everything in their paths.

The remaining students were evacuated immediately, and all of a sudden, two other Spider-Men appeared out of the blue to assist. They were recognized as the three Peter Parkers from the spiderverse. The entire student body was grateful for their appearance as the school was just as prepared for this dangerous event as they are for the weatherman forecasting an inch of snow on the ground. Literature teacher Ms. Gaffigan shares how she felt in this situation, “I basically had no idea what I was doing. All I did was lead the students to our assigned fire drill spot which I knew would not keep them from danger but at least I could say I did something to combat the situation.”

Dr. Connors took one of our own RHS students to the top of the water tower, and used her as bait to draw in all of the Spider-Men. The trifecta shot their webs and performed every stunt imagined before she was tragically thrown off the top of the tower. Thankfully, one of the Peter Parkers performed the ultimate rescue where he reached out and grabbed her with his web before it was too late. The other two Peters had reportedly been sneaking into Dr. Mazur’s chemistry class to create an anti lizard serum (witnessed by previously mentioned senior Torrin Donaldson). The Peters cooperated with the cafeteria staff to put the serum in all of the garbage that the lizards would find in the dumpster for an afternoon snack.

Senior Veronica Soroka describes the rescue mission as “Something that I never thought would ever happen to me in a million years. I thought that once Dr. Connors had me, I was as gone as Jack from the Titanic after Rose did not share the door.”