A recap of the Roswell City Council Debate 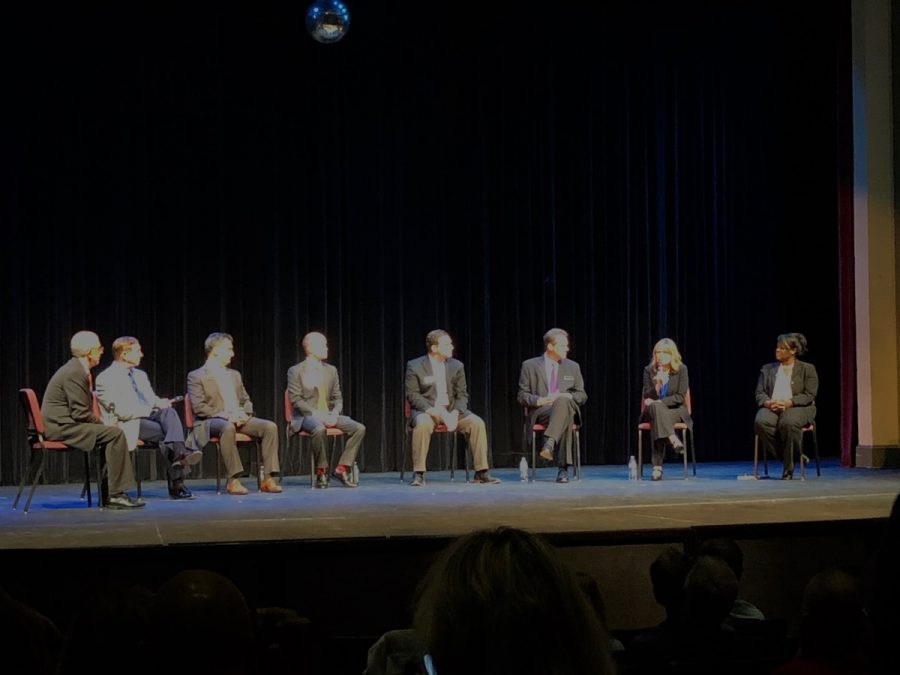 The candidates engage in a get-to-know-you session. Credit: Claire Mulkey

The Roswell City Council candidates are nearing the home stretch, as shown by the debate that took place on Tuesday, October 2nd at the Roswell Cultural Arts Center. “The Great Debate” was sponsored by Positively Roswell, the Roswell Community Masjid, the Historic Roswell Business Association, Roswell Next, Roswell Attorney Project, and Roswell Magazine. Candidates for the available three posts argued and described their stance on such issues as pedestrian connectivity, historic district preservation and zoning, and development and coinciding infrastructure.

After the introductory “get-to-know-you” section, candidates Donald H. Horton and Marcelo Zapata engaged in the first debate for Post 1.  In a unique twist, the questions were placed in plastic eggs and drawn randomly out of a bowl. Their conversation went relatively smoothly, focused on Roswell’s historic assets, city government roles, collaboration with local non-profits, and the tax base. Horton, a former councilman, believes that Roswell’s many historic assets should be placed under their own department. Zapata made a comment that the cemeteries should not be forgotten and that the historic furniture and homes need investment. Horton’s idea was a popular one with the audience, as Roswell’s historic properties are a big part of local identity. Current councilman Zapata told his listeners that on the topic of connecting historic areas, “we need to respect the character of the area.” On the subject of Roswell’s tax base, Horton explained that new office space needs to be created to enlarge the tax base to relieve the bulk of tax stress that lies on the shoulders of residents. In response, Zapata explained that the belief he is anti-development is false. Both candidates finalized their time with closing remarks utilizing quite a lot of ethos. Horton gave his shortened resume, including thirty years in the private business sector, two years on city council, and lots of business knowledge. Zapata ended by saying, “We the people of Roswell need to vote for candidates they [sic] can trust.”

The second part of the debate is where things heated up. Current councilman Michael Palermo and Roswell native Geoff Smith went head to head on a number of issues, though it seemed that oftentimes, their opinions were not all that different. The main topic of their debate was city connectivity, public safety, and….sidewalks. Question after question involved sidewalks, to the point where members of the audience yelled out for new questions. Smith and Palermo really ramped up their intensity when the debate got around to development in the historic district. Palermo accused Smith of supporting the Vickers project, which is a source of conflict in the Roswell community. The audience was the most engaged during this exchange with each side’s supporters even yelling and standing at times. The two candidates then verbally sparred, countering and re-countering each other. Smith proclaimed that in his publicly printed newsletter, while he did endorse parts of Vickers, he did not support it in the location and proximity to the street where it was ultimately built. He said that concerning development, “We need a vision… or a developer is gonna give us their own vision.” Smith wrapped up his portion by saying, “People are afraid of the commercial corridor coming into neighborhoods. Well, I’m for neighborhood charm coming into the commercial corridor.” This segment of the debate was definitely the headliner of the night and ended with high energy and an excited crowd.

The candidates for Post Three are Christine Hall, Lisa Holland (not present), Kay Howell, and Keith Goeke. Hall, a mother, businesswoman, and Georgia PTA State Finance Committee member, emphasized her alignment with the wants and needs of the Roswell community, not special interests. Kay Howell told the audience, “I think the biggest misconception is that I’m too young and unseasoned…I just got my doctorate and I’m working. So I’m not young, though I might look it.” This warranted laughter from the audience. Goeke, a Navy veteran and small business owner, appeared reserved, but he explained that he’s really “tenacious,” yet he doesn’t advertise it.

Over the course of the night, many hot topics were covered. The Roswell City Council seems insignificant or trivial to many, but these are the individuals who make decisions about things like the Vickers project and the future of Mimosa Hall. Early voting starts October 15th. Get out and vote and encourage others to vote, too.