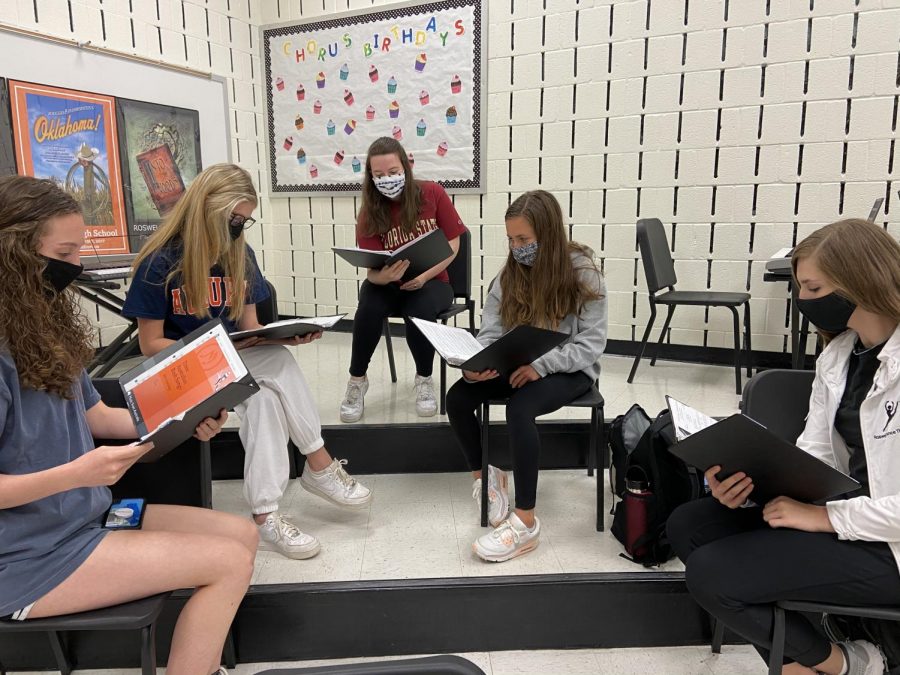 In simpler times, electives were hour long classes where students could relax, pursue an interest, or kill time. Now, in the cutthroat world of college admissions, many students are seeking electives that show their academic prowess and rigor. They feel they do not have the time to waste on subjects that are not impressive to colleges, so they choose upper-level or academic electives.

Some of the upper-level electives offered at Roswell High School are newspaper, lit-mag, yearbook, advanced chorus, orchestra, and band, or broadcasting. For many of these classes, an entry-level or prerequisite class must be taken first, so many upperclassmen are in the higher level electives. In newspaper, articles, blogs, and social media or advertising sales are required to pass the class. In chamber chorus, which is the highest level chorus class available, students must complete daily journals, theory work, piano scales, and online sightreading practice, in addition to the traditional chorus work with learning pieces and performing them. Chamber orchestra is similar to the chorus, since they both compete in competitions and learn music theory on par with the AP music theory class. Students in broadcasting work hard to produce a weekly school news video complete with relevant information about upcoming events, school sports stats, and funny skits. All of these classes are doing much more than playing dodgeball in the gym, yet they receive the same grading and recognition as PE classes.

Many students are feeling frustrated with the school system because they attempt to take these academic electives to show colleges their extensive workload, but are not rewarded with the seven additional honors/AP points given in those upper-level classes.Junior Emma Martin, who participates in chamber chorus and musical theater as her electives, believes the classes “should be considered an honors class because the material we learn is much harder than the entry-level electives.” For example, newspaper, an elective that requires many hours of work and is graded like a real literature class, does not receive the seven extra points that honors or AP literature classes do. If students in chamber chorus are doing practically the same work and difficulty level of the AP music theory class, they should be receiving the seven points. Mrs. Williams is the chorus teacher at Roswell and teaches women’s, jazz, chamber, and men’s chorale. She says that “the material we cover in class, specifically chamber chorus, is either pre-AP music theory or college-level performance material,” which is why students are pushing to get the extra points.

In academic electives, a high A actually signifies mastery and understanding, rather than the completion grades awarded in other electives. Since academic or higher-level electives are graded more harshly and cover more extensive material, many students’ grades are lower than if they chose to take the more basic electives. They are putting in the extra work but not being rewarded for it fairly. It is a similar situation to AP classes versus on-level classes. Students that take AP classes know that they will have to do significantly more work and learn harder material than the students in on-level, but they also know their grades will have an additional seven points added on. However, students in academic electives are simply doing extra work and learning more in-depth material without the reward of seven points. Both newspaper and personal fitness are graded on the same level, when looking at a report card.

So why do students continue taking more difficult electives if all they do is create more work and hurt their GPA’s? Junior Sadie Zeigler, who participates in the Buzz, Roswell’s broadcasting network, believes it is because the upper-level electives are “extremely beneficial in making well-rounded students ready for a career following high school.” She says that “though they are rigorous courses, they fulfill the niche areas of interest for students.” Junior Marlee Greenspan is in chamber chorus and the Buzz and sees upper-level electives as preparation for the real world. Zeigler and Greenspan also belong to the group of students who think the upper-level electives deserve honors points, saying they use the same skills needed to thrive in honors classes in their electives. Junior Ryan Buckley is also in broadcasting and enjoys it. However, he does admit that he does more work in the class than he did in other electives. For example, Buckley does “two to three hours of work outside of school in addition to five days of in-school work for the Buzz, whereas I only had to use in-class time for Rec Games last semester.”

The bottom line is that students in upper-level or academic electives are putting in extra work. They deserve the seven honors points.